New Internationalist is an Oxford-based monthly magazine that punches far, far above its weight. Its investigative journalists are the best-briefed in their areas and its campaigns in favour of global fairness, equity and humane polities as of right are righteous.

Here’s a timeline – http://newint.org/about/timeline/ – with some of the magazine’s  activities marked. Of course, as its music columnist (I think that my first piece for them was about Brit ragga musician Apache Indian in the early 1990s), I’m prejudiced but I also know what I’m talking about when I wish NI and all who sail in her many more years of what they’re doing. 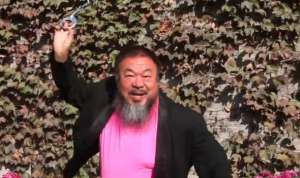 A link to my blog on New Internationalist’s site. 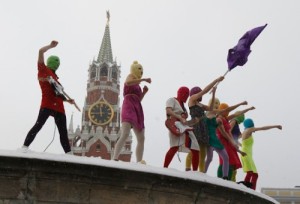 Until a few weeks ago, it seemed that – despite a lack of a record label, and indeed, much music to put on one even if they had – Moscow’s Pussy Riot was doing just fine. The all-female masked punk band had an audience which, thanks to social media, stretched far beyond its Russian homeland.

For many Russians disillusioned with the mix of political systemic corruption, a barely fettered capitalism and a cultural conservatism, the band’s emphasis on shaking things up was, well, interesting, especially in the run-up to march’s presidential election. Songs such as ‘[Vladimir] Putin’s Pissed Himself!’ and flash gigs in or around major Moscow sites (Red Square, churches and the city’s subways) got the band noticed. A cross between the Guerrilla Girls and the Sex Pistols, Pussy Riot were irreverent, DayGlo and a welcome addition to the annals of agitprop. To make the headlines even more salacious, the Russian Orthodox church had denounced them as sinners.

But then things became seriously difficult for the Rioters – referred to as the ‘Poosis’ in Russian following a performance in Moscow’s Cathedral of Christ the Saviour on 21 February. A rough and ready video shows the balaclava-ed Poosis performing their ‘punk prayer’. Using the form of the Russian Orthodox liturgy, the Virgin Mary was beseeched to ‘chase Putin out’. At least three women – first Nadezhda Tolokonnikova and Maria Alyokhina, and subsequently Irina Loktina – were arrested. Facing charges relating to hooliganism and blasphemy, the three are now in detention until a hearing on 24 April.

Supporters of the Poosis, ranging from ordinary anti-Putin demonstrators to art groups, are meanwhile rallying help, with  English-language websites set up to funnel international help. A Party Riot Bus is scheduled to circle Moscow’s Garden Ring on 31 March, with news briefings and performances planned. Aboard the bus Pussy Riot supporters will hold a news conference, an art display and several performances.

‘Gray has well-tuned political antennae, and, unlike many writers on World Music, has some broad sense of what is currently going on beyond the confines of the latest record label press release, including an awareness of radical and experimental work.’ Clive Bell, The Wire

‘Louise Gray confronts with unflinching intelligence, insight, fairness, and a keen awareness of how politics, cultural and contextual differences, fantasies and more prosaic expectations must be taken into account before this remarkable story can be fully understood.’ David Toop, musician, author and sound curator